As we enter the New Year, the Eredivisie continues its hibernation during the winter break. The break is a great excuse to look back on what we’ve experienced – as Ajax fans, the first half of the 17/18 season has been nothing short of tumultuous. Oodles of doubt were construed after the appointment of Marcel Keizer and the Nouri situation. After PSV’s hot start, many in Amsterdam thought the league title race was over. However, De Godenzonen have managed to pull back within a few points of the top, and we have a new regime to look forward to after Erik ten Hag was snatched away from Utrecht.

We have lots of things to pour over, so feast your appetite on AjaxDaily’s mid-season analysis. Enjoy!

So, things didn’t go great in the Champions/Europa League this season. A defeat on aggregate to OGC Nice in the Champions League playoffs was disappointing, but it keyed us into Keizer’s ideas for the rest of the season. A backline of four center-backs and a midfield controlled by Hakim Ziyech attempted to link up with the forwards, but Ajax were forced to mostly rely on chances from the midfielders. Donny van de Beek emerged as an outlet in the box, overlapping from his traditional midfield position.

After the sale of Davinson Sánchez, it was Nick Viergever who moved centrally and Mitchell Dijks at left-back. Ajax lost home and away to Rosenborg, which meant we wouldn’t be competing in a European competition this season. With all eyes set on the Eredivisie, Keizer’s squad was out for blood.

Three comfortable wins over Groningen, VVV, and Zwolle (and loss to Heracles) to begin the season left fans in high hopes. Klaas-Jan Huntelaar emerged as a threat to Kasper Dolberg’s starting position up top with three goals in three appearances. Keizer also began his experimenting with a back three against VVV – Frenkie de Jong played as somewhat of a defensive-midfielder playmaker, although that role would move even deeper in the coming weeks.

A draw against ADO and loss to Vitesse saw Ajax fall behind PSV Eindhoven, but the performances of Ziyech as the side’s main creator were promising. The Moroccan was finally growing into his role as the side’s star, now we just needed others to follow his lead.

Big wins over Heerenveen and Sparta Rotterdam – albeit quite flattering results to the less than great performances – alluded to Keizer’s tactics beginning to come true. New signing Maximilian Wöber, Sánchez’ replacement, was beginning to earn himself a spot in the starting lineup. The Austrian’s ability to pass out of the back and defend well allowed him to transition between center-back and left-back, opening up the potential for a more attack-minded player to join the defensive line (wink, wink).

As October drew to a close, De Klassieker beckoned. A massive 1-4 away win over Feyenoord saw Dolberg finally get back into goalscoring form, but the real star of the show was Brazilian winger David Neres. The enthralling inverted-winger amazed with his closely-controlled dribbles and great passing vision. However, a 1-2 loss to Utrecht meant that Keizer drew a lot of criticism.

Fortunately for him, Ajax picked up form in a fantastic way. A massive 0-8 win over NAC Breda kicked off an undefeated finish to the calendar year, with the only dropped points in the league coming away against Twente. Despite massive wins over PSV and AZ with great performances from Neres, Frenkie de Jong, and Lasse Schøne, the Ajax board felt it necessary to end the tenure of Marcel Keizer.

From breaking news and entertainment to sports and politics, get the full story with all the live commentary.

In one of the most shocking decisions in recent memory, Keizer – as well as coach Dennis Bergkamp and assistant Hennie Spijkerman – had their contracts suspended by the club. While there were certainly some rough patches of form throughout the season, Ajax had just gotten their mojo back and had climbed within 5 points of PSV at the top. Each decision has a reaction, though, and the reaction has been largely positive after the announcement of Erik ten Hag as Ajax’ new manager. There is a lot of hope that the former Utrecht manager can reignite Ajax’ dominance domestically with his possession-based tactics.

A world-class defender and club captain departed from Ajax over the summer. It’s almost guaranteed that any other club would’ve used the proceeding season as a chance to rebuild the squad. That’s not Ajax, though. A squad still packed with young talent was assumed to have the skill and drive to succeed just as much, if not more than the previous season. Things haven’t been perfect, but performances have been good – all things considering.

Hakim Ziyech – De Godenzonen’s major threat. The 24-year-old lanky midfielder has been everywhere during his second season in Amsterdam. Eight assists and four goals underline a fantastic contribution from Ziyech, whose line-splitting passes and immense work ethic are just as crucial to Ajax now as they were under the tutelage of Peter Bosz. Over four key passes per game is really all you need to know about the Moroccan playmaker. 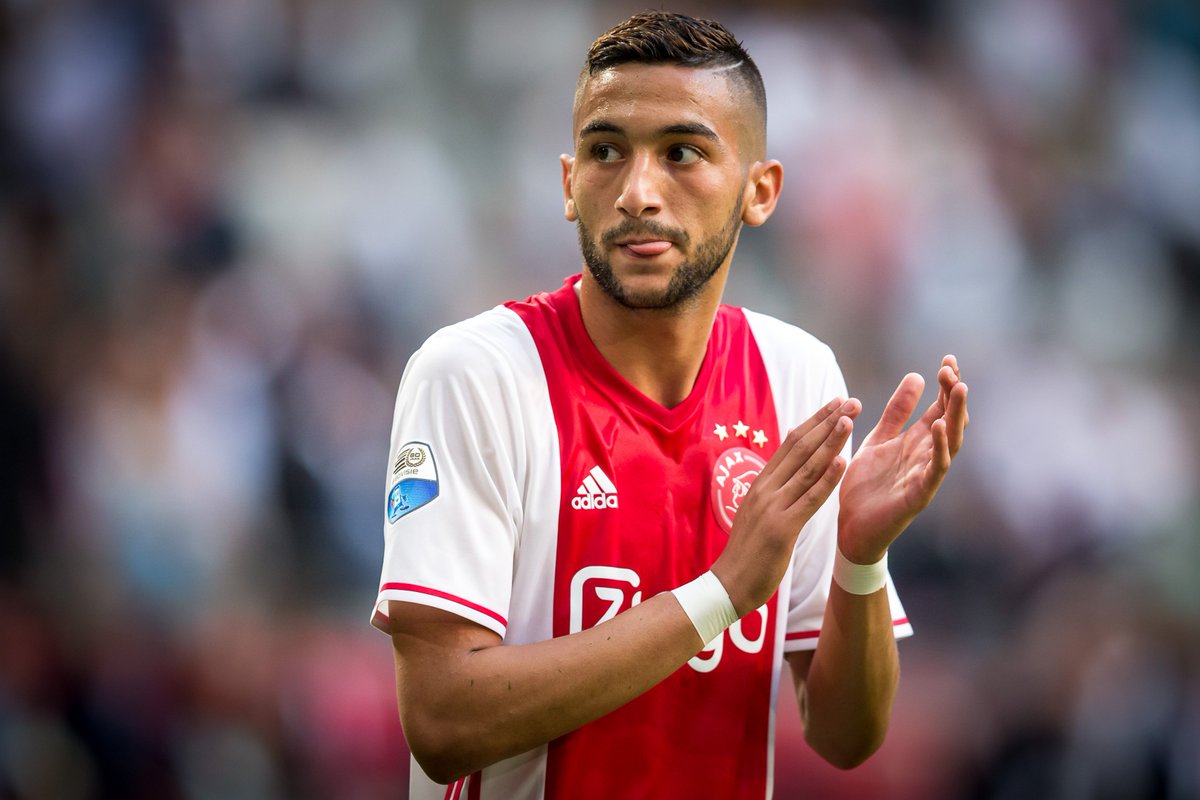 David Neres – I was critical of the signing of the Brazilian for €12m nearly one year ago, but he’s turned out to be one of the club’s best players. The inverted winger has so much talent when on the ball. Neres’ dynamism and intelligence allow him to easily break apart Eredivisie defenses, giving easy opportunities to players like Dolberg in the box. Ziyech may move to a bigger league next summer, but Ajax better do their best to prevent the same from happening to Neres.

Matthijs de Ligt – Ajax’ phenomenal 18-year-old defender is the shining example of the influence of De Toekomst. The youngest player to start a Europa League Final has been a rock at the back throughout the season. While he does sometimes make mistakes, it’s important to remember how little experience De Ligt does have, and how much time he has to improve. His physicality has been massive for Ajax after the Sánchez sale, especially with a depleted back line when Frenkie de Jong plays as a defender.

Frenkie de Jong – Speaking of the devil, Frenkie has shown his true potential this season. Keizer finally gave the 20-year-old a platform to succeed, whether that be as a midfielder or defender. Against PSV, Frenkie dominated as a central defender, roaming forward and creating chances while also defending superbly against the league leaders. Hopefully Erik ten Hag keeps the immense talent in the starting eleven.

Frenkie De Jong – 17/18 (@lilregista) What can’t Frenkie do? The young man has the ability to control the midfield, break the lines with ease, glide through defenses, and pick out beautiful long balls. He’s looking like a generation defining footballer. https://t.co/yxYvrRA16k

Amin Younes – On the opposite end of the spectrum, it seems like Amin Younes’ poor performances have finally reached a tipping point. The German winger has been linked with moves abroad after being iced out of the lineup by Justin Kluivert. To be honest, Younes is an incredibly gifted player – like Neres – but his finishing product is poor. His inconsistency epitomized Ajax’ 16/17 campaign, but now it’s reached a point where the club won’t stand for his inability to produce. Will he be sold, or will ten Hag give the German another chance?

Kasper Dolberg – The Danish striker got off to a bad start at the beginning of the season, but the sophomore slump seems to have ended after his performance against Feyenoord. Watch for Dolberg to improve his goal tally in the second half of the season – ten Hag’s possession style should allow for space to open up for Dolberg, whereas a lot of chances in Keizer’s side were produced for the overlapping midfielders.

What does the future hold?

Many Eredivisie followers will say that Ajax are looking like the favorites for the title heading into the 2018. How is that possible when the league leaders are still five points ahead?

For one, looking at our main title challengers, we can see that PSV Eindhoven are over-performing. Sure, the likes of Hirving Lozano, Marco van Ginkel, and Jürgen Locadia are absolutely lighting the league up, but it is true that the Boeren have been finishing their chances at a (probably) unsustainable rate. According to xMetrics, PSV have attained seven more points than their expected points suggests, while Ajax have one less point than they statistically should. Even back in October, data gathered by 11tegen11 suggested that Ajax were outperforming league rivals even before the win against PSV.

Ajax with the best stats of the Eredivisie. In fact, all stats with predictive value (xG, very deep passes, etc) look very good.

We can gather that Ajax were performing well under Marcel Keizer. Now, it just so happens that Keizer is no longer in charge of the club. What does the signing of Erik ten Hag suggest? Well, as we’ve already discussed, Ten Hag will likely look to dominate the opposition more than Keizer did (at least in terms of ball control). This could be very beneficial to players like Dolberg, Neres, and de Ligt, who strive off controlling possession.

However, players like Ziyech and Kluivert may not be as suited to this style of play. They are often at their best in spur-of-the-moment instances, such as catching an opposition out of position or cracking a long shot in after a quick counter-attack. Nevertheless, everyone on the Ajax squad possesses great technical ability, so it shouldn’t be a huge transition between Keizer and ten Hag.

In summary, the sacking of Keizer was perhaps more politically driven than the club would care to admit, considering the positive underlying factors of the performances. It also must be said that being knocked out of the European competitions before the group stages is a massive failure and a rocky start gave PSV a lot of confidence in the league. Overall, we should be satisfied with how our beloved Ajax have done to this point, but wary of what the future holds.