Frenkie De Jong has played as a deep-lying playmaker in a 4-3-3, one of three centre-backs in a 3-4-3, a midfielder in a double-pivot in a 3-4-3 and a centre-back in a more conventional 4-3-3. In a season where the strides made by Peter Bosz have been replaced by a malaise which saw Marcel Keizer, Dennis Bergkamp and Hennie Spijkerman lose their jobs, De Jong has been a shining light for Ajax fans. His technical brilliance and natural football intelligence have earned him a permanent starting role in this team while it has allowed him to become an integral facet of Erik Ten Hag’s Ajax side. As a metronome, moving the ball out of the back next to Matthijs De Ligt, De Jong is showing immense improvement in his ability as a centre-back although his future will almost certainly lie in midfield.

Ajax’ Europa League final performance against Manchester United was seen as a victory for football commerce over football purists but included a moment which would become pertinent to this season. Ajax had failed to pass through the lines and move the ball into a deeper-lying Bertrand Traore to create moves which had led to the creation of chances all through Bosz’ tenure. Frenkie De Jong – who came on late in the game – was hemmed in tight quarters next to the Ajax corner flag only to drive the ball out, play a one-two with De Ligt to move into space to drive the ball and outmuscle Marouane Fellaini and play the ball to Traore who attempted a flick on to a runner in behind. At only 20-years of age, De Jong possesses the innate ability to know when to drive the ball to beat pressure or when to create an intricate passing sequence to move the ball forward even against the bigger teams.

At the beginning of the season, Frenkie De Jong started impressively as in Ajax’ 2-1 loss against Vitesse where he played in midfield, him and Hakim Ziyech were the standout performances in Keizer’s system, which was geared to the brilliance of individuals rather than actual team ethic. De Jong’s ability is only negated when his teammates are not on the same wavelength as him. This was evident in Jong Oranje’s match against Ukraine, where his passing was erratic as there was no tangible strategy to progress in possession with poor shot locations, resulting in a 1-1 draw. However, in a match against Andorra a few months later, in a much more cohesive unit, he put in one of the most dominant and impressive performances of his career.

Frenkie De Jong played as a deep-lying playmaker with more positional awareness as with the fullbacks pushing up and De Jong dropping in between the defensive two-chain, the adroitness of the 20-year-old Dutchman was on full display. De Jong drove the ball into space as Andorra sat off him with a deeper-lying block of pressure. The Ajax youngster also consistently did well to create passing angles for his centre-backs, Rick Van Drongelen and Pablo Rosario, when they were further up the field. He was also effective in winning the ball higher up the pitch as he did for the first goal when he won the ball on the edge of the box and played a defence-splitting pass to Idrissi, who crossed for AZ Alkmaar’s Guus Til to tap in.

De Jong was recycling the ball with purpose as he played a pass to Sam Lammers who nearly executed a flick on to allow Idrissi to get in behind again. De Jong orchestrated the third goal when he played a one-two with a teammate, who then to play a through ball for Til to turn provider for Idrissi. De Jong was constantly looking to play through the tight central channels while his centre-backs showed immense confidence in him to feed him the ball, even in the tighter areas or when he was under pressure. At one point, De Jong was well closed down before spinning out of pressure to hit a pinpoint diagonal pass to Justin Kluivert at which point the commentator let out a hearty laugh as he was amazed at the ability of the youngster.

De Jong then played another through ball to Kluivert who crossed for Idrissi to volley in the fourth goal. For the sixth goal, being fouled didn’t stop him from chipping a ball to Richairo Zivkovic who was fouled in the box for a penalty. De Jong then scored a well-deserved penalty of his own for the seventh goal in what was an 8-0 thrashing. The midfield maestro finished with an 87% pass succession rate of 105 passes, 4/4 accurate crosses, 2 tackles, 9/12 take-ons and 7 ball recoveries in a brilliant all-around performance. 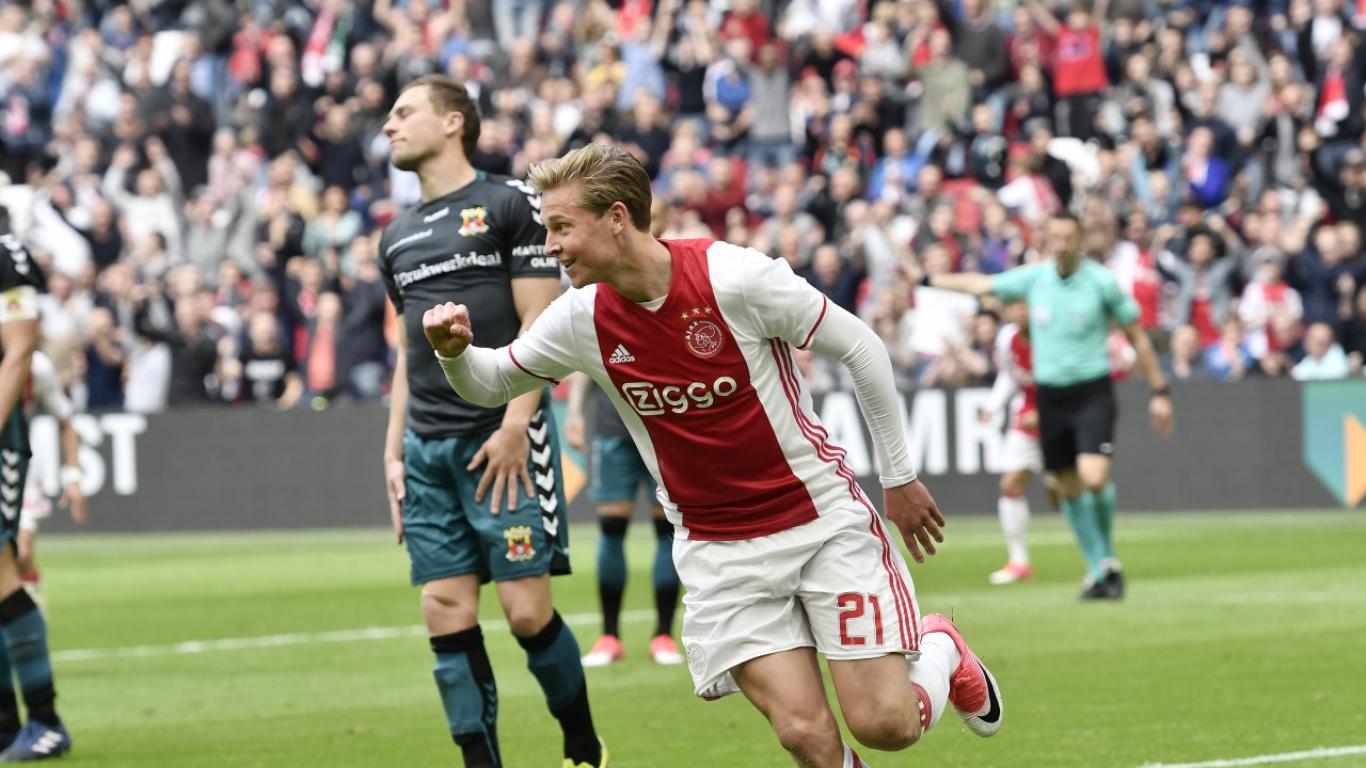 Read — Frenkie de Jong: Losing his markers with the feintest of touches

16 days later against Roda JC, he came off the bench for Deyovaisio Zeefuik for Ajax to switch to a back three with Frenkie De Jong and Lasse Schone playing together in midfield. De Jong introduced himself by dribbling past a glut of Roda players and playing Kasper Dolberg in behind with a sublime pass for the Dane to have his shot saved. De Jong then won the ball and flicked it to Justin Kluivert who drove the ball forward, cut in and unleashed a perfectly arrowed strike past a hapless Hidde Jurjus to make the score 3-1. De Jong played a cross for Donny Van de Beek to make it 4-1 but his assist for the fifth was truly special. He made the perfect angle for Joel Veltman to feed him the ball before pinging a genius long-ball to Kluivert who cut in and rounded off a hat-trick. In 45 minutes, De Jong finished the game with a 93% pass succession rate in the final third, 3 chances created and 3 assists with 4/4 takeons. Even after a hat-trick, Kluivert gave credit to Frenkie De Jong for his hat-trick of assists.

“We played well in the second-half with Donny [Van de Beek], Hakim [Ziyech] and Frenkie [De Jong] all providing good passes forward and we enjoyed ourselves. Frenkie De Jong provided such an impulse. He is so calm on the ball and provides good passes. He is a great player,” said Kluivert to the Dutch media after the match per a translation from Football Oranje’s James Rowe.

Against PSV, he showed his initiative in pass and move sequences as he drove forward to pass to Donny Van de Beek who played Kluivert in behind as the youngster turned towards the touchline to find De Jong supporting him for the metronome to play the ball to Lasse Schone who beat his man and sent a strike past Jeroen Zoet. Against NAC last weekend, De Jong demonstrated his growth as a centre-back. As Angelino was shaping up for a cross before the goal, De Jong showed great initiative to adjust his body and mark his man to prepare for the cross before heading it out to Matthijs De Ligt who mis-kicked before Ambrose scored.

Frenkie De Jong and De Ligt spent most of the game playing above the halfway line as the former showed an impeccable reading of the game to stay deep while his partner pushed forward to cut out counter-attacks. De Jong played beautiful game-opening diagonals when the central pockets were congested but mostly attempted to thread through balls to teammates in tight passing channels as most attacks started with the 20-year-old. Just before half-time, he played an incredible no-look chip to Van de Beek in the box which landed perfectly on the recipient’s laces. De Jong also showed stout positioning to defend three crosses throughout the game as he becomes more comfortable with shouldering his defensive responsibilities. De Jong finished the game with a 91% pass succession rate, 3 chances created and 11 ball recoveries.

Opposition coaches will be caught in a dilemma of whether to pressure Frenkie De Jong or sit in a deeper block to deny him passing options. His ability to comfortably drive the ball into space and work innate combinations with teammates allows him to be effective at negating both options. The young footballing Einstein’s ability to create options for teammates without possession and to open up even the tightest of games with moments of genius has earned him the interest from clubs in the bigger leagues. His poise and grace in possession, as well as his multi-faceted playing style and floppy blonde hair, makes him a throwback to the great Dutch and Ajax midfielders of the past at a time where Dutch football is in need of a unique talent like his.

“Often I said that I understood the trainer and I did my own thing in the field. If it went well, and luckily it did, you did not hear the trainer.”

De Jong wins 1 aerial duel while making 1 tackle and 1 interception per game as he assimilates to the centre-back position on a weekly basis. He makes 1 key pass and 2 dribbles per game while completing 92% of 60 passes per game on average with 3 accurate long balls according to WhoScored. He has created 27 chances this season mostly from centre-back while winning 71% of his duels as an astounding 79% of his passes are forward passes. He has accumulated 7 assists this season so far as it would be interesting to see if he can earn a promotion to midfield sooner or later during the season. De Jong has always backed his intuition and mindset as he begins to reap the benefits of those traits.

“How often we were not told as a team in the youth of the trainers: simple play, no unnecessary risks,” said Frenkie De Jong in an interview with Voetbal International last year. “But my strength and quality is my intuition, I can not just ignore that. Then I become a player like a thousand of my age walking around. Often I said that I understood the trainer and I did my own thing in the field. If it went well, and luckily it did, you did not hear the trainer.”

Liberos come few and far between in world football; one of the only other modern-day liberos in European football is Hoffenheim’s Kevin Vogt, who transitioned into that role under the guidance of Julian Nagelmann and Alfred Schreuder. Schreuder, a former FC Twente boss, is now Erik Ten Hag’s assistant at Ajax as they look to shape the career of the vastly talented 20-year-old. Frenkie De Jong extended his contract at Ajax from 2019 to 2022 as he described his current stint at centre-back as an ‘experiment’ as he will look to establish himself as a midfielder in the longer term. His multi-positional ability continues to prove his immense talent and highly-developed footballing brain as he has become Ajax’ most important asset.