The very memorable 2010-2011 season, in which Ajax beat FC Twente in a duel for the first championship in seven years, is unforgettable for all Ajacieden. But not only Ajax supporters look back on that season with great memories. ADO Den Haag ended that Eredivisie campaign in seventh place, after which they would beat FC Groningen in the final of the play-offs for a Europa League ticket. Key player in that success was centre forward Dmitry Bulykin, scoring a total of 21 goals. Ajax coach Frank de Boer was impressed and signed Bulykin next season.

The Russian was primarily placed on the bench, with Kolbeinn Sigthórsson as De Boer’s first choice. Despite that, Bulykin would play 19 games in which he would score an impressive 9 goals. Most of those goals were of great importance during the games, including the 2-2 against PSV and the late opening goal at NAC Breda. His goals would help Ajax in conquering the second league title in a row, finishing six points ahead of rivals Feyenoord. Before the season was over, Bulykin got recognized by his home country by receiving the prize for best Russian player in a foreign league.

Bulykin was 33 at the end of the season and decided to leave the Amsterdam club after one season in order to get more playing time. The Moscow born player decided to accept an offer from FC Twente, for whom he’d end up scoring 5 goals. After that season he’d go back to Russia to play for Volga Nizhy Novgorod, which he left after one season too. After that Bulykin was a free agent, but he decided to retire from professional football after a lack of offers. Just before the debacle at Rostov in de last play-off match for the Champions League at Rostov (4-1), Bulykin looked back at his period at Ajax with warm feelings. “Ajax is the favourite club I ever played for. The history of the club still is massive and impressive. The traditional way Ajax plays is and will always be fantastic. Now again there is a great generation of talents emerging.” The championship in 2012 was a highlight in his career: “In my first home game i already noticed the attacking style of Ajax. The 50.000 supporters in the stadium are very supportive and give the players a big boost. I cherish the nice memories I have of Ajax and Amsterdam.”

Before his time at Ajax, a young Bulykin made name for himself in the Russian Premjer Liga. When he was 18, The Tsar made his debut in professional football at Lokomotiv Moscow. In his three year spell at the club, he scored 28 goals and won the Russian Cup in 1997 and 2000. After the Russian cup success, Bulykin transferred to Dynamo Moscow for whom he scored 29 goals in 90 matches. After two of his six total years at Dynamo, Bulykin was called up for the Russian national team for the first time in 2003. On September 9th he made his debut against Ireland in a EURO 2004 qualifying match, but that wouldn’t be the highlight of his international career. The following game, Russia had to win to assure their qualifying for the European Championship in Portugal. Bulykin was given a starting position and he did not disappoint Russian coach Georgi Yartsev: the striker scored three goals in a crucial 4-1 win over Switzerland. Even Brazilian legend Pelé noticed his outstanding performance.

Bulykin was part of the squad that competed in the European Championship, but a group with host nation Portugal, Spain and later winners Greece was to mighty too qualify for the next round. After losing to Spain (1-0) and Portugal (2-0) the Russians were already eliminated. In the last match however, the Russians played for what they were worth and ended up beating Greece 2-1, including a Bulykin goal. A remarkable achievement, since the Russians would turn out to be the only team that could beat Greece in the tournament. After the tournament, Bulykin only played one more game for his country against Slovakia. He managed to score in that World Cup 2006 qualifying game, but Russia coach Georgi Yartsev would get fired a few games later when Portugal destroyed the Russians: 7-1. His successors never had faith in Bulykin, which meant that his career seemed to have come to an early end. In 2011, during his time at Ajax, Bulykin claimed the reasons he didn’t get called up for the national team were ‘non-football related’. Despite the presence of a Dutch coach at the national team at the time, Dick Advocaat, he never got called up again. The quartet Andrei Arshavin, Roman Pavlyuchenko, Pavel Pogrebnyak and Alexander Kerzhakov were always preferred.

During his time at Bayer Leverkusen, to which he moved in 2006 from Dynamo Moscow, he got the record to his name for receiving the fastest yellow card in Bundesliga history (12 seconds). It wasn’t until the 20th Bundesliga round that he was posted in the starting eleven for the first time, which was the same game as the ’12 second yellow card’. His career in Germany didn’t last longer than one season and five goals. Bulykin decided to go to RSC Anderlecht, but the club didn’t show a lot of faith in him. He got loaned out to Fortuna Düsseldorf in the 2.Bundesliga, but only managed to score once. However, the next season he would prove Anderlecht wrong by scoring consistantly at ADO Den Haag. Before Anderlecht realized their mistake, Ajax snatched the Russian. Despite only staying in the Netherlands for three seasons, The Tsar made a big impact on Dutch fields. And without the Russian, Ajax probably would have one less championship to be proud of. 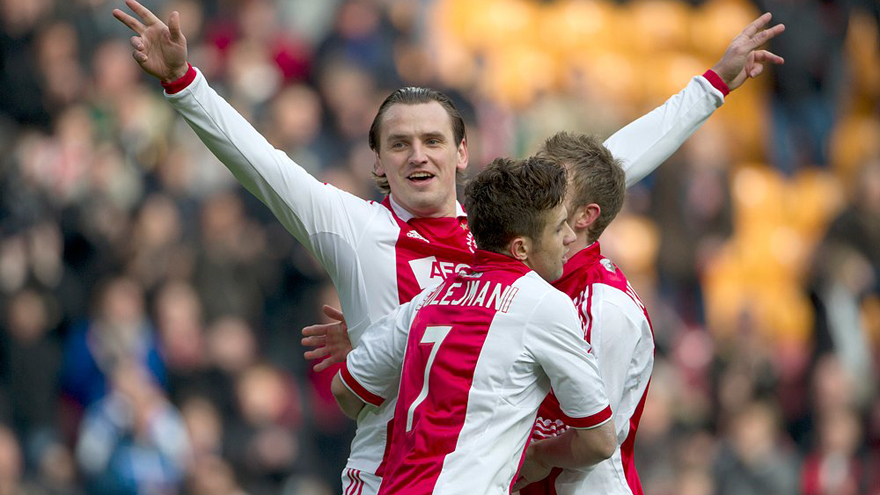