I think it is best to get this out right at the beginning of the season. No matter what the next nine months hold and no matter how many trophies are held aloft by Ajax at the end, the season will still have a hollow feel following the traumatic pre-season collapse of Abdelhak ‘Appie’ Nouri.

That said, it was heartening not only to see the performance last week against Nice but to hear a player like Donny van de Beek, a long time friend and teammate of Nouri, come out and say that the team have decided that they want to win everything that they can in honour of their ill teammate.

This first competitive match was always going to hold a lot of emotion and Ajax were excellent in spells on their way to securing a 1-1 draw. An away goal for the return leg at the Johan Cruijff ArenA could well prove to be key for the outcome of the tie.

It was interesting – in what was Marcel Keizer’s first match in charge – to note that we will likely see a continuation of the ‘Ajax way’ under the former Jong Ajax coach. The traditional 4-3-3 system is becoming more of a 2-3-5 in the attacking phase, with the type of movement and positional play that became familiar last season under Peter Bosz. In the defensive phase there was perhaps less of a pressing focus with the side instead dropping in to their compact defensive block in the first instance, that said as the game progressed there were obvious pressing triggers in the wide area or when a Nice player miscontrolled a relatively simple pass.

As with the general style of play there was a sense of continuity with the team selection for the match. André Onana keeps his place on goal behind a back four of Joel Veltman, Davinson Sánchez, Matthijs de Ligt and Nick Viergever. In midfield Lasse Schöne played as the number 6, or controlling midfielder, whilst Donny van de Beek and Hakim Ziyech played ahead of him with more licence to roam forward. Justin Kluivert was preferred to David Neres in the wide right position with Amin Younes on the left and Kasper Dolberg starting as the lone striker.

On the bench there was again a sense of continuation of the Ajax way with more experienced players like Klaas Jan Huntelaar and David Neres joined by Frenkie de Jong, Carel Eiting, Damil Dankerlui and Deyovaisio Zeefuik as the link between the first team and the youth academy continues.

As I alluded to above, when in the defensive phase in this match Ajax were more passive than we have seen in previous seasons with an emphasis on creating a compact block instead of pressing across the width of the field.

The 4-3-3 quickly became a 4-1-4-1 out of possession with Schöne in particular being active in the defensive phase, moving across the width of the field and plugging gaps as and when required. Both wide forwards were also quick to come inside and form a narrow line of four with Van de Beek and Ziyech. While Younes in particular had a tendency to forget his defensive responsibilities at times last year early signs are promising that this will not be the case this season.

Here you can see the compact defensive structure in action. The defensive line is compact with both fullbacks having tucked inside to deny space centrally. Lasse Schöne as the controlling midfielder is within the two lines of four and his position is flexible. He will shift left or right to close down passing angles or cover runs from the opposition midfielders.

The two wide forwards for Ajax also tucked inside to prevent the opposition from being able to progress the ball through the centre of the pitch.

Once again in this example we see how compact the defensive shape was throughout the match. There is a slightly different configuration in this image however, with Van de Beek having shifted from his static position to engage with the ball on the near side.

This movement is covered by Schöne stepping slightly forward and covering the gap, with the movement to press on the near side. However, even one player engaging tightens the area and makes it harder for the Nice players to move the ball in to their attacking third. 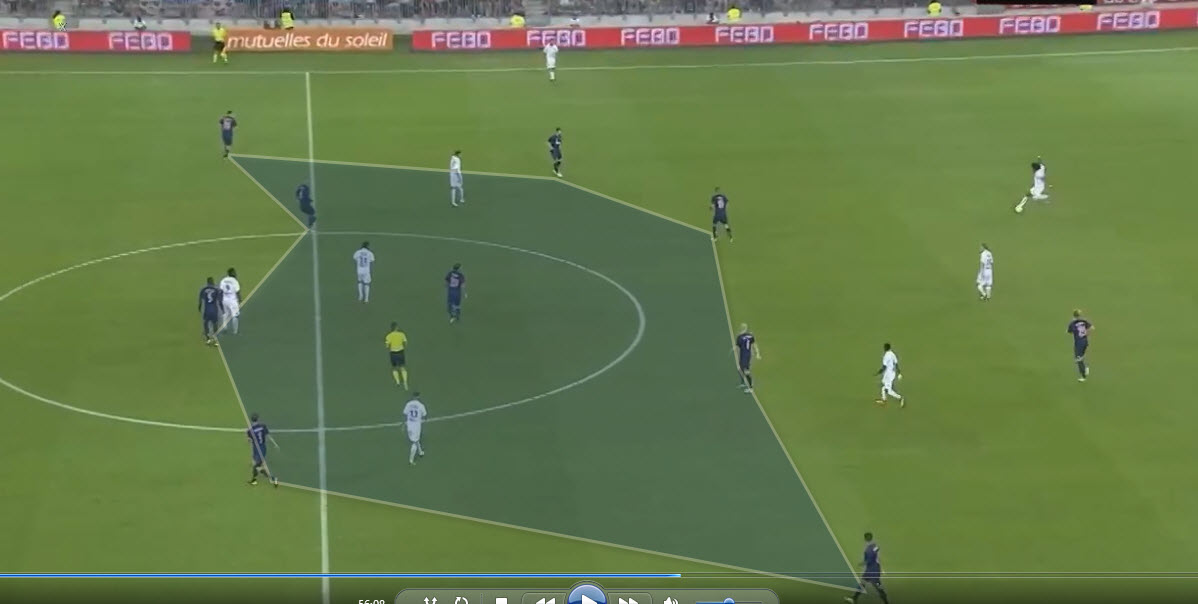 This third example also serves to illustrate that Ajax were content to play with a high defensive line throughout the entire match. Marcel Keizer obviously trusts the pace of Sánchez and De Ligt and their ability to read and react to danger when the ball is played over their heads in to space.

In pushing up to the halfway line in this manner and in keeping their structure with a single controlling midfielder means that the space that the opposition have in which to play is constricted.

As with last season Ajax place a great emphasis on the role of Davinson Sánchez and Matthijs de Ligt when it comes to building in to the attacking phase from the back.

Both central defenders are extremely comfortable in possession of the ball and they are confident in dribbling forwards to provoke the opposition to engage with the ball and create spaces centrally in to which the ball can be played. As one of the two carries the ball out of defence, the positional play ahead of the ball is very strong with players taking up positions on up to three separate lines of the field to create depth in the opposition half. 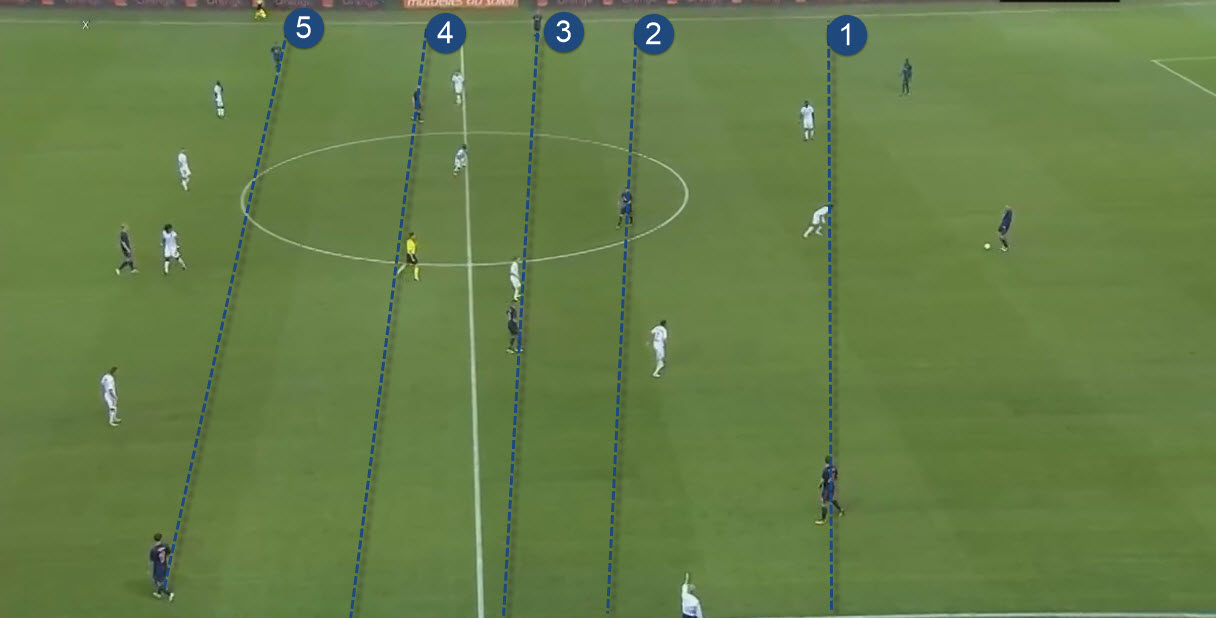 Here De Ligt has the ball with Nice defending in a fairly basic 4-4-2 with three lines and little by the way of depth. Each line depicts a position of the attacking structure in which a player is aligned. The basic rule is that the more lines on which the attacking teams are placed the more depth that you have to your attack.

With this depth there are more angles through which Ajax can look to progress the ball forwards. Both Sánchez and De Ligt favour low driven passes that bypass the lines of the defensive structures and find their teammates in space. This is only possible through the form of positional play that we see above. 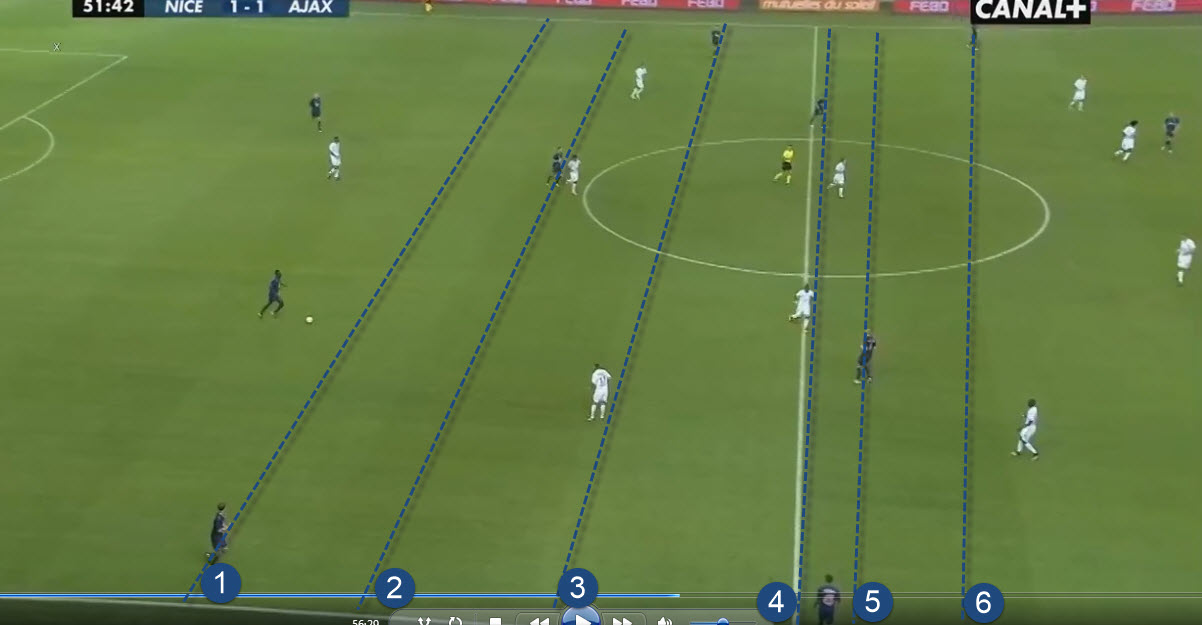 On this occasion it is Sánchez who is taking the ball out from the back to start the attacking movement for Ajax. As with the previous example you can see the lines on the field that show the areas of the field that the Ajax players have occupied.

Both Sánchez and De Ligt are perfectly comfortable in dribbling the ball out from the back to force an opposition player to come out and engage with the ball. As soon as the opposition player breaks the defensive structure, passing lanes and space opens up and the ball can be progressed forward. There are very few teams who will remain comfortable allowing a defensive player to dribble forwards without looking to close them down. 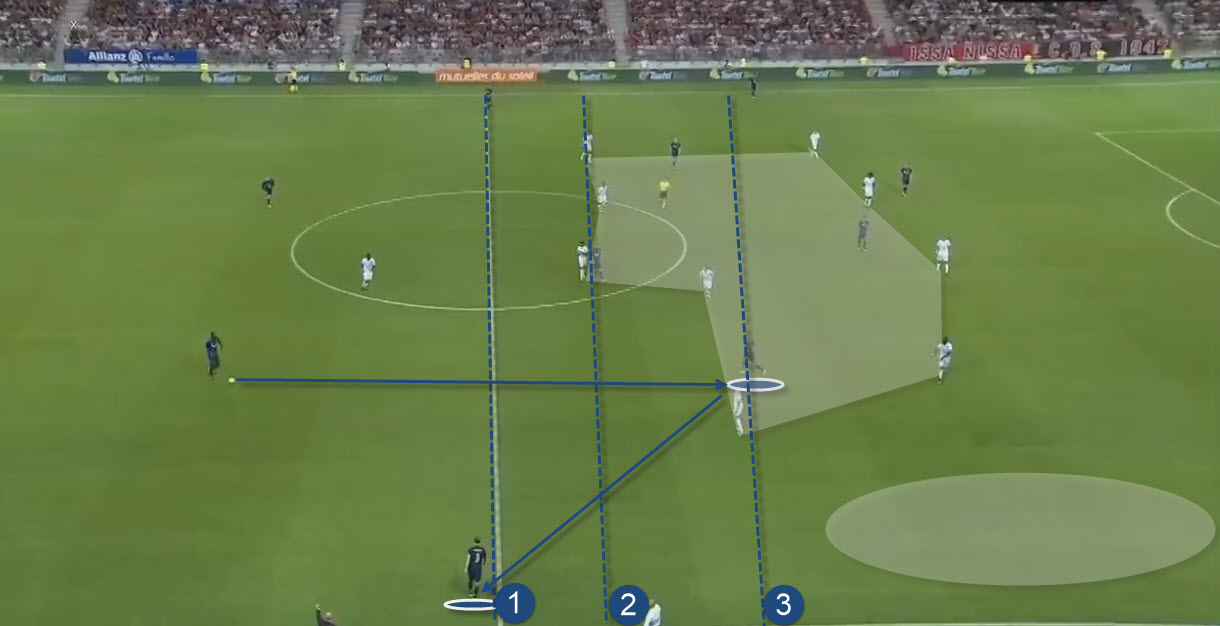 Once again here Sánchez is tasked with bringing the ball out from the back. This time the defensive structure from Nice is a 4-5-1 with one striker who is not looking to pressure the ball. I have highlighted the space on the field which is most efficient for Ajax to attack through.

Justin Kluivert has moved in from the right side to occupy a central space between two Nice players. In doing so he has emptied the space in the wide area so that Veltman has space to attack in to from right back.

The initial pass from Sánchez is driven in to Kluivert in between the defensive structure and this immediately pins the wide defender in to position and prevents him from shifting to cover Veltman. The young winger then immediately bounces the ball out to Veltman and Ajax can progress the ball comfortably. When the opposition choose to sit in a relatively deep defensive block attacking spaces in the wide areas is the best route to breaking down the defensive structure.

Another interesting aspect of the build up phase in this match was the willingness and tendency of Hakim Ziyech to drop deep in order to take possession and create opportunities to advance the ball forwards the opposition half.

When the Nice defensive block is deeper, there is space to be exploited ahead of the structure. We would see Ziyech drop back in to the deeper area in order to collect the ball. As with the two central defenders dribbling forwards this is designed to prompt one of the defensive players to break the defensive structure and open up a clear passing lane that can be exploited.

Given the style of play and general character of Frenkie de Jong, it is remarkable that the young midfielder is not a product of De Toekomst. His ability on the ball when linking with teammates and manipulation of space is the hallmark of the Ajax system.That he was signed from Willem II was all but a given once his ability became more widely known.

In this match De Jong did not come on until the 73rd minute when he replaced Schöne. The switch saw Van de Beek drop back in to the controlling midfielder position whilst De Jong became part of the two number eights with Ziyech. In my opinion as the season progresses this will be the configuration of the Ajax midfield from the start of matches.

De Jong plays with a freedom and sense of creativity that will endear him both to Ajax fans and to neutrals alike. He is full of feints and tricks that serve to create space and time in which he can play, with the overall goal always to progress the ball forwards. He is a player that rarely plays a pass just for the sake of it.

Here De Jong has collected the ball and is travelling across the pitch ahead of the midfield line of the Nice defensive structure. With his body and eyes pointing to the wide area the expectation is that the pass will be made to the player in the wide area.

Instead De Jong, without breaking stride, flicks the ball with the outside of his foot through the defensive line to the attacking player in space, immediately four defensive players are taken out of the game.

Above is a short video clip that displays De Jong at his best. From picking the ball up in the left half space he ends up wide on the right hand side. What is most telling however is that he is constantly available and looking to provide a passing option to a teammate. Whenever he gets possession he is immediately in control whether on his right or on his left and looking to provoke the opposition to open up space that can be used to penetrate the opposition penalty area.

De Jong is not a player that will gain lots of goals or assists over the course of a season, instead his game is all about the creation and the manipulation of space.

The tie is delicately poised at 1-1 going in to the second leg in Amsterdam, The French side scored first but it was Ajax who controlled the match, dictating the tempo and trying to find a way through the Nice defensive structure. If Ajax can replicate this performance in the second leg then I would expect them to win the match comfortably. Nice are a talented side but they lacked the form of cohesion that the Amsterdammers showed when going forward.

The atmosphere at the Johan Cruijff ArenA is likely to be emotionally charged for the return leg with the players desperate to give the fans something to cheer following an extremely difficult pre-season campaign.