Prior to this away match with Heracles, Ajax were rocked by the revelation that English Premier League side Tottenham Hotspur had placed an official bid for Colombian central defender Davinson Sánchez. Whilst Marc Overmars was quick to come out on behalf of the bid to state that Sánchez would not be sold, this was anything but ideal preparation for the match.

I have previously touched upon the fact that this promises to be a difficult season for Ajax, given the continued health issues suffered by Abdelhak Nouri in pre-season, and on the back of defeat to Nice in the Champions League qualifying round it was important that the club got a positive result from this opening league fixture away to Heracles.

The main team news for Ajax saw Davinson Sánchez dropped amid all of the ongoing speculation, which led to Nick Viergever moving inside from left back to play as the left sided central defender, with Matthijs De Ligt shifting over to the right hand side of the centre of defence. Whilst reports in pre season suggested that left back Mitchell Dijks was surplus to requirements at the club this new situation saw the full back starting out on the left hand side of the defence. 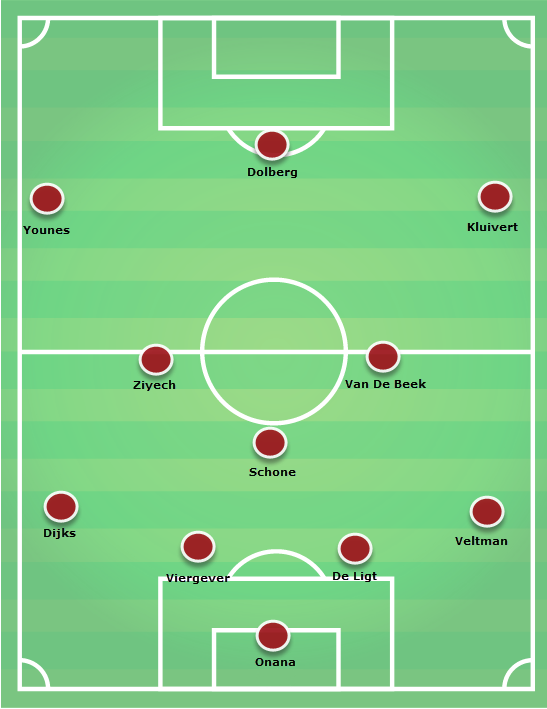 New Ajax coach Marcel Keizer retained his faith with young winger Justin Kluivert with the Brazilian David Neres continuing on the bench, other than that there were no real surprises with system or personnel.

Ajax fluid with their use of positional slots

Ajax are of course famous for the implementation of total football in the 1970’s with the side of Johan Cruyff coached by Rinus Michels setting a new benchmark in football and devising a whole new way of playing the game.

There appears to exist within the club a real desire to fully rediscover the ‘Ajax way’ of playing and this at least partly why they chose continuity in the pre season with the promotion of Keizer from his role at Jong Ajax last season. Whilst Keizer is a proponent of the traditional 4-3-3 system with a single holding midfielder and two wide forwards retaining the width of the field and stretching the play.

In this game however there was clear evidence of a slightly more fluid attacking system, in some instances three or four players would rotate positions as the Amsterdam side looked to build their attack through the thirds of the pitch.

In this image Lasse Schöne is in possession of the ball in the central area of the field. As the controlling midfielder he was primarily responsible for circulating the ball and ensuring the attacking momentum continues.

The positional slots occupied by those further forward however is slightly different, just ahead of Schöne we have Hakim Ziyech in the central area, a fairly normal position given his role in the team. In the right hand half space however, Amin Younes is looking to burst forward beyond the Heracles defensive line, having crossed over from the wide left area. In the left half space Donny van de Beek is looking to find space between the Heracles defenders. In the wide right area Kasper Dolberg has drifted out wide.

All of these movements and switches make if exceedingly difficult for the defending team to maintain the integrity of their defensive structures.

This time I have captured an image showing Ajax building up from their defensive third. Joel Veltman has retained his defensive position and essentially formed a back three with De Ligt and Viergever. As the latter splits out to the left hand side the onus for progressing the ball falls on the youngster De Ligt who has essentially taken over that role from Sánchez.

Ahead of De Ligt the structure is relatively stable, the only difference Is that with Dijks moving higher up the field in the wide left area Younes will then split inside and take up a dangerous position in the half space. 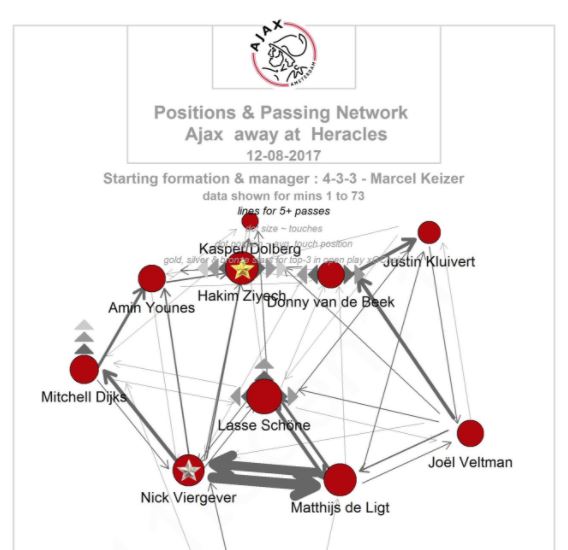 This passing map courtesy of the excellent @11tegen11 – who uses data sourced from Opta – further supports this point. As you can see Younes has moved in to the left half space whilst Dijks is more advanced on the left than Veltman is on the right. On the right hand flank Kluivert retains a wide position and tends to play almost on the forward line as an advanced wide forward.

By being able to move from two central defenders to three in this manner, Ajax give themselves a solid base to build their attacking phase.

Ajax progress the ball forwards through the thirds

Despite losing the match in the end by two goals to one there are still positive aspects that Keizer and his staff can take away from the match. Ajax progressed the ball well through the thirds and carved out a number of excellent chances as the match wore on.

The key in the initial build up was the excellent performance of De Ligt with the youngster emerging as a real leader for the Amsterdammers within this match.

Here we see an instance where De Ligt replicated the forward movements that we saw so often last season from Sánchez. When in possession of the ball and with little pressure from the Heracles attackers who were passive, we saw De Ligt drive forward with the ball eventually forcing an opposition player to engage with him and leave his defensive position.

As he is closed down a passing lane is created and De Ligt is extremely adept at passing the ball between the opposition lines in to an attacking player, this move in particular saw the ball played in to the feet of Dolberg who could then combine with others in the final third.

Here the play is out on the left hand side and Ajax combine effectively in tight spaces to progress the ball out in to the final third of the field.

The key is the third man run from Ziyech, who times a forward run to get in behind the oppositions line of pressure and take possession of the ball in space. As the first pass is made centrally he bursts through the gap between his two teammates and creates the third man run. As he does so, the defensive players are unable to track the run properly.

Throughout the match Ajax enjoyed more possession and created better chances than the home side. As you can see from the above Expected goals graph, again created by @11tegen11 using Opta data, Ajax has an expected goals score of 2.69 to the home sides 0.74. Although the match was lost the Amsterdam side can take some measure of hope from their performance.

For all the apparent positivity that we can take from the performance going forwards there is no doubt that there are still issues that have to be addressed in the defensive phase, especially if the club does lose Sánchez.

There were times that a side as relatively limited as Heracles were able to play through the Ajax defensive structure with relative ease.

In a quick transition from Heracles we see Ajax effectively overloaded across the width of their defensive third with three defensive players to the four Heracles attackers. As the first run is made across he face of the defence De Ligt is pulled across to track his man, this opens up a passing lane to the left half space and the ball is quickly worked out to the wide player who has space to attack in to.

On this occasion we see the defensive structure from the Amsterdammers immediately before the Heracles goal. With the ball in the wide area the Ajax defensive line is horribly stretched. There is no defensive support and the forward is able to time his run across the face of the goal to meet the low cross and convert past Onana.

A disheartening defeat for Ajax certainly, but not one that should give too much concern. The second Heracles goal was a great strike but not one that you can account for on a game to game basis.

There were enough good moments from Ajax going forward to convince that when they reach peak fitness they will be more than good enough to challenge once again for the Eredivise title. There is no doubt however that the Sánchez transfer saga will have to be resolved one way or another as quickly as possible.