In Football Manager 2017: The Ajax Journey, Alex Dieker looks to take Ajax back to European glory by using three R’s: Recovery, Revitalization, and Redemption. Recovering Ajax as the main Dutch superpower will mean using shrewd business, a strong youth policy, and tactical awareness to bring the Amsterdam club back to its usual Eredivisie dominance. To revitalize Ajax means to regain the club’s status as one of the world’s premier youth academies by using a “conveyor belt” system of bringing young players into the first team as star players get sold on. Finally, Alex will look to bring redemption back to the club by winning the Champions League and becoming the world’s strongest squad.

Welcome back. Before I get into the action of Ajax’s 2021/2022 season, I’d like to apologize for the delay. Usually I can crank through these seasons in no time, but that time has been crunched recently. Nevertheless, we’ve hit double-digits with this story and everyone who has been here since Part 1 deserves a big thank you. If this is your first time reading, every installment is linked above for your reading convenience. Let’s get into the (imaginary) football.

Last season was heartbreaking. As the final whistle blew to signal a Manchester United victory in the Champions League final, my head sunk. Sitting in my room late at night, staring at my laptop with a glaze of hopelessness, confusion, and anger, I vowed revenge.

This is no time to relax. No time to become complacent with our recent Champions League and domestic exploits. That attitude was certainly embodied in our transfer windows: both summer and winter. Here’s the summary of both.

With our first team pretty much set, my focus going into the summer window was depth. Lots of it. I bought a few cheap youngsters, including striker Petr Krejci who had a spectacular season on loan at NAC by taking home Eredivisie top scorer. Harold Roa, a Colombian deep-lying playmaker, joined us from Xolos Tijuana in Mexico on a free. Playing behind Patrick Gijzen, he competed with wonderkid Lorenzo Hoogland throughout the season. Our big deadline deal was Mattia Schnyder, an 18-year-old Swiss complete forward. Yes, I said it: complete forward. It’s not often that you find a player so young with the quality to play naturally in the role, but Mattia has that quality. One look at his attributes will show you that €13 million was actually a bargain.

I moved Ricardo Farcas on to Real Sociedad for €7.5 million, Gilles Decock to Tolouse for €6m, and Arkadiusz Stelmach to Nancy Lorraine for €3.4m because of a build-up of too many central defenders. Santiago Ascacibar moved on for a small fee after not developing very well despite spending years in the first team. Rafik Guitane moved to Vitesse for just under €3m as well.

The wintertime was quite the transfer window for Ajax. Right away, I broke the club-record fee by purchasing PSV’s 21-year-old Dutch central playmaker, Sven de Groot, for €32.5m. He’s probably one of the most well-rounded FM players I’ve ever seen and will slot right into the first team, playing in front of Patrick Gijzen. We also picked up Brazilian left-winger Édipo Felipe from Santos for around €22m; a very good player to either backup Gonzalez or replace him in the summer. He can also play left wing-back: a position I might try to bleed into the team next season.

Andjelko Kuburovic (€19.5m) and Timothy Amaefule (€12.25m) both left in January because they had been usurped by better, younger players. Terry Lartey Sanniez departed to PSV for €7m after his morale dropped due to lack of game time. I brought in Senegalese Youssou Ngom, a younger and more physically dominating defender, from Lille for a potential €14m fee. 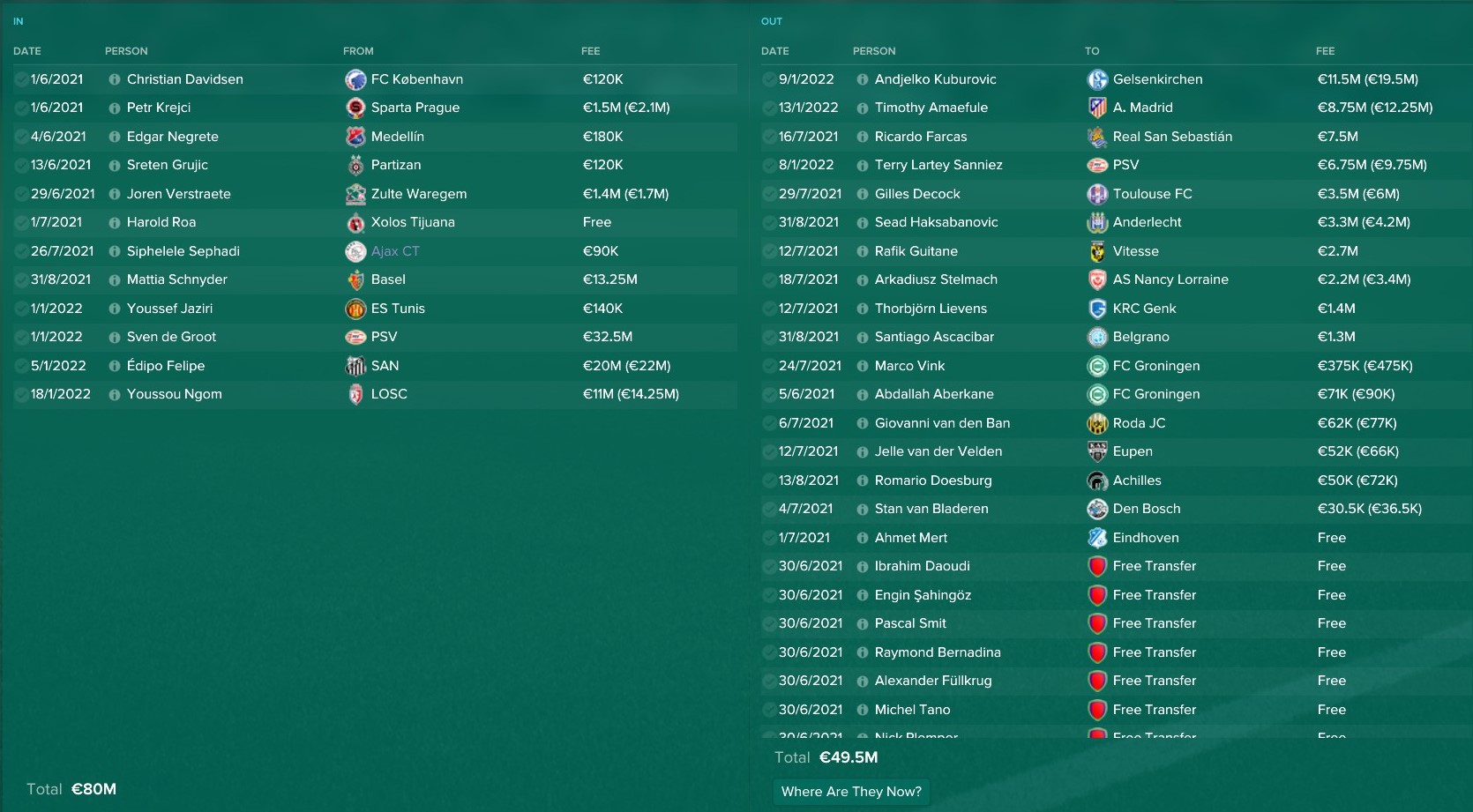 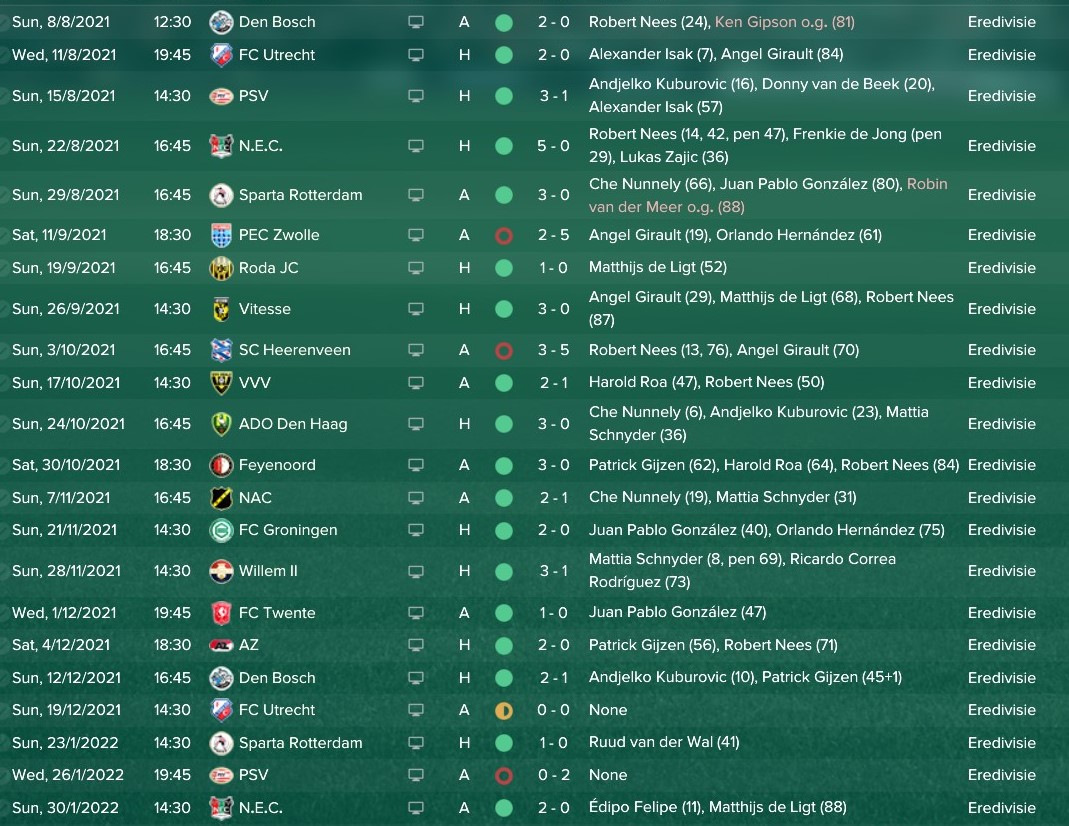 Besides two embarrassing defeats against Zwolle and Heerenveen where we allowed five goals in each match, our first half to the season was nearly perfect. A loss to PSV after the winter break was the only major roadblock to us winning the league, but we did it in spectacular fashion. With our 4-2 win against VVV on March 6th, we clinched the league with 7 matches to spare. If my memory serves correctly, that’s the earliest we’ve ever claimed the Eredivisie trophy. It really comes down to the amazing youngsters and rotational players I have at my disposal; I often chose to rest a majority of the first-teamers to prepare for mid-week Champions League action.

Three straight wins in a group consisting of København, Shakhtar, and Real Madrid, including a 4-2 romp over the Spanish giants, ensured a great start to our European campaign. Two draws and a win to close out the group stage meant we claimed the first spot in an undefeated fashion, seeing Real Madrid drop out at third.

We draw Benfica in the first round. A sense of relief shines over me, but I know there’s no such thing as an easy match in this competition. The first leg proves that as we draw 1-1 in Portugal. A good result with the away goal, but it’s still very close. Benfica has a great Brazilian midfielder, Lima, who I was at the point of making contract negotiations with him when he was still playing in Brazil, but it fell through. Nevertheless, we prevailed in convincing fashion with a 4-0 [5-1] home leg victory.

Onto the quarterfinals and a trip to London awaits. Chelsea has a very strong squad in my save; Hazard, Alvaro Morata, Kante, Courtois, and a plethora of other world class players. My worst fears were realized as we went 2-0 down at home, but an 87th-minute strike from 18-year-old wonderkid Lukas Zajic made sure we had hope going back to Stamford Bridge.

In the 37th minute of a close affair in London, Mattia Schnyder continued his brilliant season (a season in which he usurped Alexander Isak and Robert Nees for the starting striker role) and scored an equalizing goal. We still needed another goal though, due to the away goals rule, and we couldn’t find it before Chelsea went and scored a goal of their own. We pushed forward to no avail and the tie finished 3-2 in favor of Chelsea. Not the Champions League run we’d hoped to have.

However, every up has its down, right? This means another addition to this story next month! In all seriousness though, Patrick Gijzen and Pablo Dragún were satisfied that we made it that deep into the competition, resulting in a new, massive €100k per week contract for Gijzen. However, Orlando Hernandez and Phillip Michiels, two superb players, will likely force their way out of the club this summer after I promised them we’d win the Champions League.

For the last couple of seasons, I’ve maintained most of my top players in a bid to keep my squad as competitive as possible against Europe’s best clubs. For the most part, this has worked, but we’ve just not quite been able to get over the hump and win the Champions League. I do believe that next season will be our best chance though; Schnyder will keep improving at striker, Gonzalez and Felipe will battle it out on the wing, and Che Nunnely is still our best player and wants to remain Ajax’s top right-winger.

Zajic will easily fill Hernandez’s role if he leaves, and de Groot and Gijzen have some superb backups in Hoogland, Roa, Donny van de Beek, and Frenkie de Jong. Dragún is a beast at right-back and Makhanya and Tayou provide each other great competition on the left flank. Even if Michiels leaves in the summer, Matthijs de Ligt, Ruud van der Wal, and Alexander Thüring are superb defenders. Gauchinho and Onana are both amazing between the sticks, and I’ve already brought in some huge potential youngsters in many positions. Look forward to next season.