If you were a professional footballer, or anyone else for that matter, just think how great it would be if your name became part of a phrase that was widely used in your native language. This is what happened to former Ajax and Manchester United player Jesper Olsen. Unfortunately for Olsen, it was for all the wrong reasons.

Some of you will be old enough to remember the 1986 World Cup finals in Mexico. Jesper Olsen was playing for Denmark in the round of 16 game against Spain. Earlier in the match he had given the Danes the lead from the penalty spot. Then just before half time disaster struck. Olsen collected the ball from his goalkeeper, Lars Hogh, and would then attempt to return the ball to Hogh (back passes to the goalkeeper were still allowed in those days). Unluckily for Olsen his back pass ended up at the feet of Emilio Butragueno instead. The Spanish striker levelled the match and went on to score four goals in the game, which Denmark lost 5-1. As a result of this, the phrase ‘En rigtig Jesper Olsen‘ (a real Jesper Olsen) entered the Danish language. If you need some context, think of the English term ‘a right dog’s breakfast‘ and you will get the idea.

However, Jesper Olsen was a fine footballer who deserves to be remembered for much more than that one back pass. Born on 20 March 1961, Olsen’s senior career began with Næstved BK in his native Denmark. He had an unsuccessful trial with Arsenal in the 1978/79 season, though this didn’t prevent Ajax from trying to sign him 1980. However it took until July 1981 for Olsen to eventually sign for the Amsterdam club.

READ: The original flying Dutchman of Ajax and Arsenal

Olsen remained at Ajax between 1981 and 1984. In his first season (1981/82) the club won the Eredivisie title. The next season, 1982/83, Ajax successfully defended the title and also won the Dutch Cup to complete the double. During his time in Amsterdam, Olsen earned the nickname ‘De Vlo’ (the flea) due to his posture and his ability to twist, turn and jump to avoid tackles. It is reported that the then coach, Kurt Linder, regarded him as the most talented player in the young Ajax squad because of his phenomenal technical and tactical ability.

In total, Olsen played 85 games for Ajax, scoring 23 goals (not a bad return for a left winger). I would hazard a guess though, that Olsen’s time at Ajax is best remembered for the part he played in the famous or infamous, (depends on your viewpoint I suppose), passed penalty routine with Johan Cruyff. On 5th December 1982, Ajax were playing against Helmond Sport. The Amsterdammers were leading 1-0 when they were awarded a penalty. Rather than shooting from the penalty spot, Cruyff rolled the ball into the path of onrushing Olsen, who drew the goalkeeper out of his goal before laying another pass back to Cruyff who tucked the ball past the bemused goalkeeper with ease. The referee correctly allowed the goal to stand as a penalty is a direct free kick which can also be taken indirectly.

According to Olsen, he and Cruyff had previously practised this routine in training. When interviewed in 2016, he said: “We had training in September and Johan mentioned it, that we could do it in a game and we trained it a few times that weekend. We did not talk about it again until we actually did it in that game in December. Again, it was just how he was. Always thinking about how he could do things differently.”

Interestingly, this routine has been copied on at least two occasions since then. Lionel Messi and Luis Suarez successfully repeated the trick for Barcelona in 2016, unlike Robert Pires and Thierry Henry who botched it when playing for Arsenal in 2005.

Anyway, back to the career of Jesper Olsen. In July 1984, Ron Atkinson, the then Manchester United manager, signed Olsen for a fee of £350,000. Olsen was to remain at Old Trafford for more than four years. During that time he made 139 appearances for the club, scoring 24 goals in league and cup competitions. This included a hat-trick against West Bromwich Albion in February 1986.

Olsen won only one honour with Manchester United: an FA Cup winners medal in 1985. This came after the Red Devils beat Everton 1-0 in the final. Now this may not seem a lot to win at a club like United, but remember that in the 1980s, the Manchester side were perennial also-rans in the league, their only successes coming as a result of winning the odd cup competition. (A bit like now I hear some of you say, but I bet that will change under Jose Mourinho). So it was about par for the course at the time.

However, controversy once more dogged Olsen while he was at Old Trafford. Actually it was at United’s then training ground, The Cliff, that the great title fight between Olsen and Remi Moses took place. This saw Moses deposit Olsen to the turf during a five-a-side game in October 1986. The assault was of such precision and speed that the manager, Ron Atkinson, assumed they must have clashed heads (or so he told the press at the time). This would have been an odd clash of heads though, as Olsen was left with a plume of blood pouring from a gash above his eye and Moses with bruised knuckles.

To their credit I suppose, neither player has spoken publicly about the incident since then and the cause of the clash remains unknown to this day. Now Remi Moses was no Mike Tyson, but all I would say is that if I had Olsen’s build, 1.67m (5ft 6ins) tall and 60.7k (9st 8lbs) in weight, I wouldn’t be confronting anyone in a hurry, never mind a tough uncompromising midfielder like Moses.

Whether as a result of the training ground incident or not, Olsen was put on the transfer list by Atkinson at the end of October 1986. However, Atkinson himself was sacked just a week later because of United’s dismal start to the season. His successor, then just plain Alex Ferguson, must have seen something in Olsen, as he took him off the transfer list shortly after he arrived. Olsen stayed at Old Trafford for a further two years. It is even rumoured that Ferguson passed up the chance to sign John Barnes from Watford, such was his faith in Olsen.

Olsen was eventually transferred to French club Bordeaux in the 1988/89 season for £400,000. This meant United actually made a profit of £50,000 on Olsen, which was not bad business. 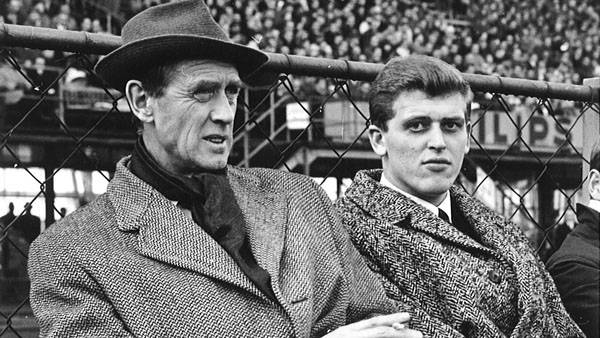 READ: The tale of Vic Buckingham at Ajax

I can remember watching Jesper Olsen play for United on numerous occasions. It was clear to me that he possessed a great football ability. However he never seemed quite able to fully adapt to the demands of English football in the 1980’s. If you think the Premier League is physical nowadays, it was far worse back then, and skilful but slightly built players like Olsen received less, if any, protection from the numerous ‘stoppers’ that were around.

After a short spell at Bordeaux, Olsen left to join Caen in 1990. After suffering a serious injury, he left Caen in 1992 and retired, this despite the fact that he was offered the chance to return to English football with both Blackburn Rovers and Nottingham Forest. As well as his club appearances, Olsen also played 43 times for Denmark scoring 5 goals for his country.

In conclusion, I feel that Jesper Olsen was one of those players who never quite fulfilled their undoubted potential. Perhaps he made a mistake in coming to England to play due to the physicality of the league, which was not really suited to his game. Had he stayed in Holland or gone to another European league then he might have thrived more. Whatever, in my opinion Jesper Olsen deserves to be remembered for far more than that one misdirected back pass at the 1986 World Cup.