Only few players in Ajax’ rich history have made such an unforgettable mark on the midfield as Christian Poulsen. Not because the now 37 year old Dane possessed brilliant technique or goal scoring ability, but for his presence and aggressive playing style. Poulsen’s stern but fair play added another dimension to Ajax’ midfield, which usually consists of technically gifted but physically powerless players.

Born on February 28th 1980 in Asnæs, Denmark, Christian Bager Poulsen joined his local side Asnæs BK as a youngster. At the age of 15, he made the jump to the youth academy of Holbæk B&I. He would go on to make his first team debut just two years later, leaving a great impression in the process. Poulsen got called up for Denmark u19, for which he would go on and score four goals. Danish top teams started to take note of the young talent, with FC Copenhagen offering him a trial in September of 2000. Within a week he signed his first professional contract. His new employer never regretted signing him, as he established himself as one the key players in the team that won the Danish league in the 2001-2002 season. Poulsen was also part of the squad that eliminated Ajax in the second round of the UEFA Cup that year. It would soon become clear that the blonde midfielder had outgrew the Danish league. He left after appearing 44 times for the capital side.

After playing the 2002 World Cup in Japan and South Korea, Poulsen joined Ajax’ current opponent in the Europa League, Schalke 04. He was very highly rated at the time, costing the German side 7 million euro’s; the highest transfer fee any Danish team had ever received up to that point. The Gelsenkirchen side would turn out to be the club where Poulsen played most of his career matches. In a total of 111 games, the midfielder would score three times. At Schalke, Poulsen played alongside one of Denmark’s most successful strikers, Ebbe Sand, who would score 73 goals in the blue shirt. The presense of a fellow Dane helped Poulsen ease into his new club, with solid performances and defensive reliability turning him into a key player. He got rewarded for his excellent play in the form of the Danish player of the year award in both 2005 and 2006.

After becoming a free agent in 2006, Poulsen joined Andalusian side Sevilla. Though only staying for two seasons at the Spanish club, he was highly successful. The midfielder appeared in 91 matches, winning the UEFA Super Cup, UEFA Cup, Copa del Rey and the Spanish Supercup. Italian giants Juventus would turn out to be his next destination, for which he played 56 games. Now hardly imaginable, but La Vecchia Segnora at the time didn’t compete for the Serie A title. That had everything to do with ex-Ajacied Wesley Sneijder’s Internazionale, which was an indestructible force under José Mourinho’s reign, with winning of the treble in 2010 as the absolute highlight.

Poulsen’s stay with Juventus would be short-lived, with Liverpool offering him a three year contract. Despite putting pen to paper, the versatile midfielder would only stay for one season, playing a limited 12 games for ‘The Reds’. Poulsen’s aggressive way of playing wasn’t favoured by the fans and after club legend Kenny Dalglish was appointed as the new manager, the days of Poulsen in northern England were numbered. An anonymous move to French side Evian would follow, before joining Ajax in 2012 to replace Vurnon Anita, who left to Newcastle United.

Under Frank de Boer’s reign, Poulsen often formed a midfield with players like Christian Eriksen, Eyong Enoh, Theo Janssen and Siem de Jong. Dennis Bergkamp, at the time already assistant manager, noticed that Ajax missed ‘an asshole’ (his words) in the squad. A player who had courage and football smartness. De Boer however, knew that Poulsen was the exaxt player he needed: “Christian can take up that role”, the ex-Ajax player and manager replied to Bergkamp’s comments. “If we have a difficult phase in the match, a player like Poulsen can take the initiative to take up that role. He is an experienced leader and we can use a type of player like him in our squad.’’

Probably one of Poulsen’s most memorable games in the Amsterdam shirt was an away game at title rivals PSV. The Eindhoven side was known for having aggressive, ‘asshole’ players with Mark van Bommel, André Ooijer and the Swede Ola Toivonen. Poulsen was quick to place his mark by smartly fouling Van Bommel and Toivonen within the first two minutes of the match. PSV couldn’t get into their game and Ajax took advantage via a Kolbeinn Sigthorssón goal. It was the first step towards a 2-3 victory, which turned out to be an extremely important win in that season’s titlerace. 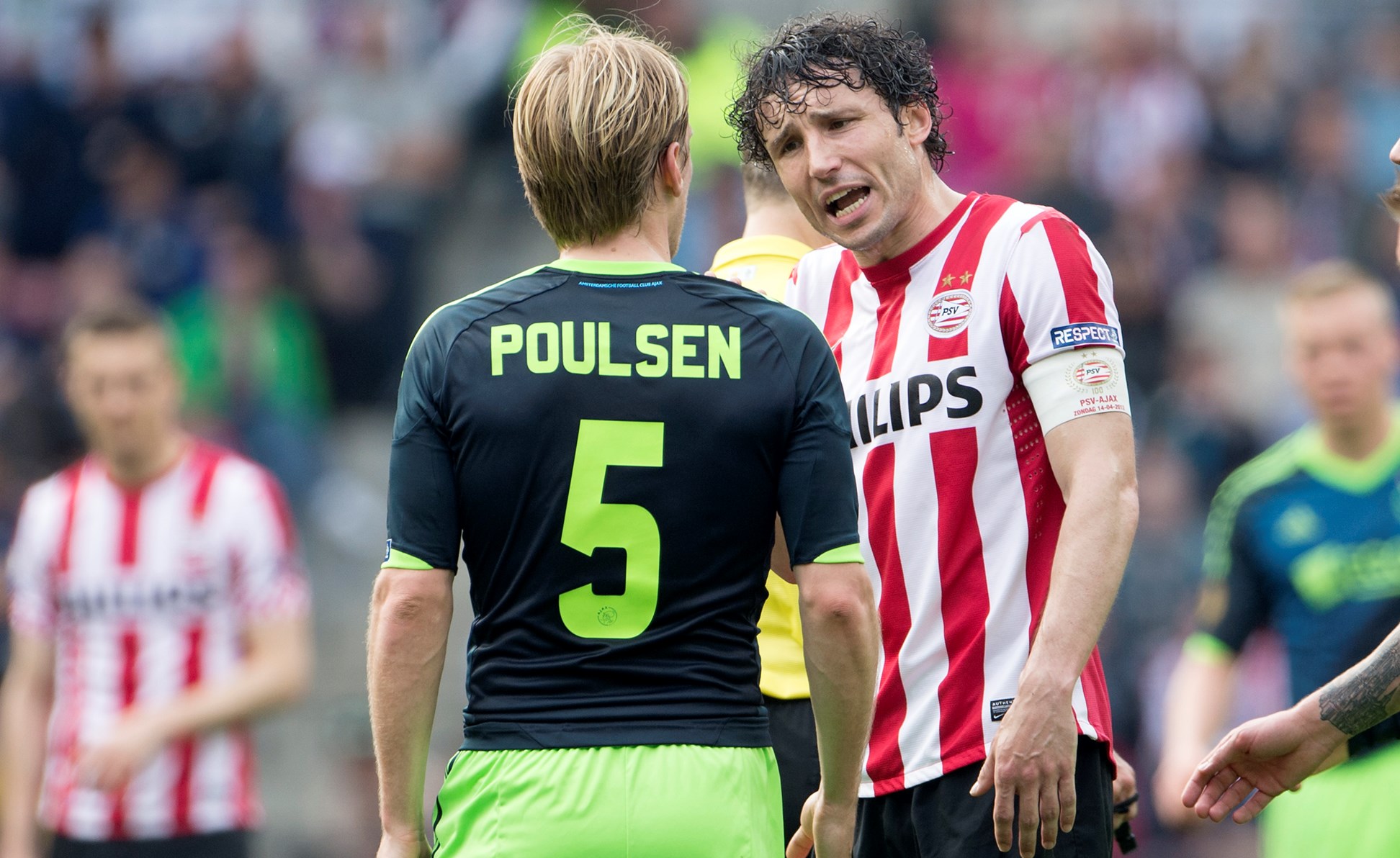 After winning the 2012/2013 Eredivisie title, Poulsen also played a big role in the championship the following season. The Dane played in 29 of the 34 Eredivisie matches, scoring his only goal against ADO Den Haag in a 3-2 victory. Though Ajax wanted to extend the midfielder’s contract, Poulsen declined and returned to his home country to play one final season at his former club FC Copenhagen before retiring from football.

Poulsen brought his son to De Toekomst in 2015 to visit a training session. In an Ajax TV interview, the Dane said he has missed Ajax and Amsterdam and that he regularly returns to the Dutch capital. Just before the clash with FC Copenhagen in March 2017 in the Europa League, Poulsen said he is ready for the next step in his life. He picked up a study and sees his son playing football. “I had a fantastic time in Amsterdam and I follow the club with pleasure.” Perhaps in 20 years time, we will see Poulsen jr. wearing the mighty white and red shirt. Hopefully with at least two league titles and a Johan Cruijff Schaal, to equal his dad’s performances.