Never a dull moment at Ajax. After racking up an impressive win against Feyenoord in De Kuip, and comfortably progressing in the cup versus De Dijk, the senior side looked rather pale in comparison in Tilburg. Eventually, the goals did come though and the winning ways were continued. But it didn’t look quite as good as many would’ve liked. Luckily though, there are squads in our set-up that do appease the aesthetically obsessed amongst us. And they all have their home pitch right here, at De Toekomst.

The Under 19’s were the first one’s to play at the weekend, travelling away to De Graafschap in Doetinchem. Reason for Heitinga and his boys to feature this early on the competition programme was the U19’s Youth League match against Legia Warsaw. The match started out rather quietly, with Ajax having the biggest chances but failing to convert them into goals.

The first goal were, surprisingly, scored by the home side. After 20 minutes, Thijs van Amerongen got the ball past Nick Plomper to make it 1-0. De Graafschap didn’t get long to treasure their lead, though, as Schön brilliantly controlled a pass through by Jensen and netted a curler just three minutes later. 1-1. A few more chances followed, most notable Danilo Pereira breaking through twice, but the score remained balanced going into half time. 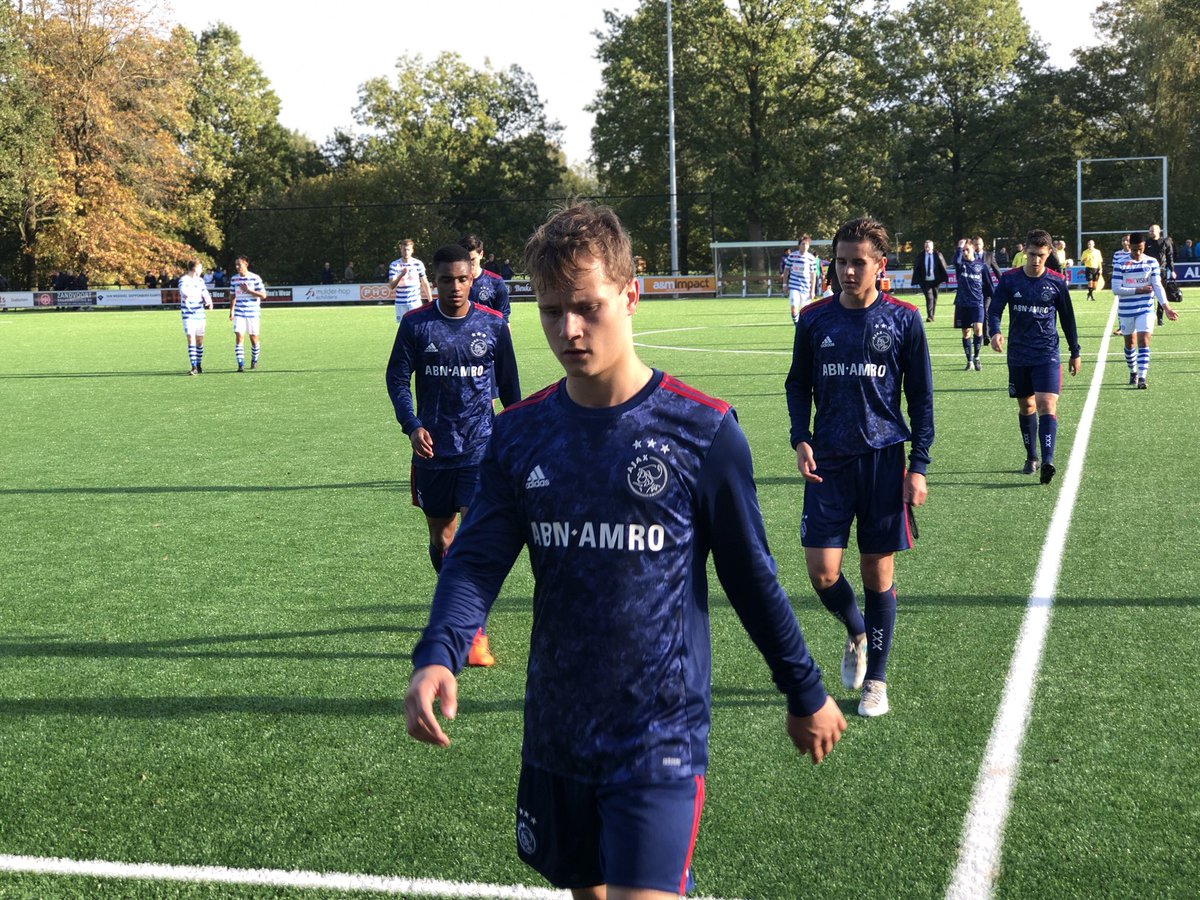 Coming out of the dressing room, the second half was a real let-down. The only big moment in the first half hour was Plomper saving on a well-placed freekick from De Graafschap’s side. With Ajax changing pace and formation, the home side then saw their chances and Joey Lieshout took it, easily going past Plomper and making it 2-1. Soon after, Ajax looked like equalising again, but Ylätupa’s penalty missed target after Jensen was fouled inside the box. A minute later, the 2-2 was scored though, this time Jurgen Ekkelenkamp finishing after some tugging and pushing inside the box. Despite Ajax pressuring the home side into buckling and grabbing the win, it wasn’t meant to be and a draw was the score Heitinga would have to accept.

Jong Ajax began their away game against FC Eindhoven in spectacular fashion, earning a penalty after just 5 minutes of play. Matteo Cassierra picked up the ball and kick, but ended up missing and thus there were no goals on the scoreboard until the 44th minute. Just before half time, Eindhoven striker Mart Lieder got the ball and scored the match opener, 1-0.

The second half didn’t feature the best start possibly by Jong Ajax, but Reiziger’s side kept battling (a characteristic they show continuously as a group) and got back into the game. In the 54th minute, Dani de Wit got the boys back on track, heading home from a free kick by Eiting. In the 72nd minute, just a minute after Mitchel Bakker made his debut for the side, Eiting picked up the ball just outside the box and produced a brilliant curler into the back of the net to give Ajax the 1-2 lead.

Shortly after, the 1-3 was scored by Dani de Wit to bring the game to a close. Seemingly. Eindhoven however did not feel that way and it was Mart Lieder scoring the 2-3 again 6 minutes before full time. Things started to look rather grim, but then, contrary to the way the game was developing, Jong Ajax were the one’s getting chances to finish it all. No more goals would be scored, meaning a win by Jong Ajax and a period title atop the Jupiler League, which was justly rewarded with a Bronze Bull.

As an icing on the cake, the Under 19’s played another Youth League game on Tuesday, this time travelling away to Legia Warsaw. With a team featuring dispensation players Sierhuis and Sidoel, Heitinga lined up for a win and was looking to drive the home side back from the starting minute.

This tactic didn’t exactly spring to life right away, with Ajax retaining possession well but being unable to penetrate through Legia’s tight defence. Sierhuis and Ylätupa got their chances, but their shots were comfortable saved by Legia’s goalkeeper. Out of nowhere, Legia suddenly grabbed the lead 31 minutes in, as Navajo Bakboord played a back-pass from hell to Issam El Maach, resulting in a 1-0 own goal. Just before half time, it was Kaj Sierhuis however redeeming Bakboord, finishing it powerfully into the roof of the net to make it 1-1.

Out of the half time break Ajax continued their good play and was rewarded for it in the 54th minute. Darren Sidoel spotted Legia’s goalkeeper being wrong-footed from a long distance and produced a long range goal that hit the back of the net to make it 1-2. A few minutes later, Legia looked to get back into the game after Sidoel caused a penalty kick but El Maach made up for his earlier error, saving the spot kick with style.

Late in the game, Ajax finally got what they deserved; the win. From a corner kick in the 81st minute, which was headed on, Sierhuis got his second of the night. Brilliantly pulling up a volley, the striker saw the ball rocket towards the top corner of the goal and into the back of the net. 1-3. In the dying seconds, it was Danish midfielder Jensen adding onto the scoreline, making it 1-4 for Heitinga and his players. A special night indeed, with Sierhuis’ brilliant goal was the cherry on the pie.