In 1918, Ajax clinched the Dutch championship for the first time in their history. Given that the club had only been founded in 1900 this was quite a remarkable achievement. Much of the credit for this rightly goes to Jack Reynolds, an Englishman who I have written about previously. Reynolds was one of Ajax’s longest serving and successful managers and is also widely recognised as the man responsible for laying the groundwork that would later blossom into ‘total football’.

However Reynolds was preceded by an Irish manager who was instrumental in propelling Ajax from the lower reaches of Dutch football, thus putting in place the foundations that allowed Reynolds to succeed. The name of that manager was Jack Kirwan.

His real name was actually John Kirwan, but he was known to everyone as Jack. Kirwan was born in Dunlavin, Ireland in February 1878. He grew into a natural sportsman and played Gaelic Football for Dublin in his youth and was part of the team that won the All Ireland final in 1894.

Following his success in this sport, he switched codes to Association Football and moved to England to play for a club called Southport Central. Kirwan was a winger and he impressed enough to attract the interest of both Blackburn Rovers and Everton, both of them top flight teams at that time.. He opted to move to Everton in July 1898. He only played for one season at Everton, making 26 appearances and scoring 5 goals.

He then moved south to Tottenham Hotspur, who at that time, were a non league side playing in the Southern League. Kirwan spent 6 years at Tottenham winning the Southern League, the Western League, FA Cup and Charity Shield. To this day, Tottenham’s 1901 side remain the only non league team to ever win the FA Cup. In total Kirwan played over 350 times for Tottenham, becoming one of their early legends.

After leaving Tottenham, Kirwan went on to play for Chelsea, Clyde and Leyton FC. He also played 17 times for Ireland between 1900 and 1909. Kirwan finally retired from playing in 1910 at the age of 32. It was at this time that Kirwan’s involvement with Ajax began.

In 1910, Ajax were still an amateur club playing in the Dutch second division. However it was at this time that the then Ajax chairman, Chris Holst, made the decision to transform Ajax into a leading club by raising funds, investing in players and hiring a British manager. During a summer tour of England, Holst happened to come across Jack Kirwan. As an available former FA Cup winner and International footballer, Kirwan was just what Holst was looking for and he was hired. 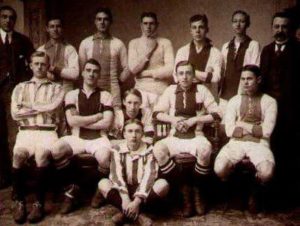 Kirwan became the first professional manager in Ajax history. When Kirwan joined Ajax they played in Red and White striped shirts and black shorts. (They must have copied my home town team, Lincoln City). 1910 was the also the first year that Ajax played at the Houten Stadium. (This was another of Chris Holst’s investments).

Kirwan was an immediate success. In his first season he steered Ajax to the second division title. This earned the club a promotion play off against Breda Zeste. Ajax were successful and for the first time became a top tier club playing against the biggest names in Dutch football of that era.

Incidentally, this promotion forced Ajax to change the club strip to the now famous white shirt with the single red stripe and white shorts. This was to prevent them from clashing with Sparta Rotterdam who played in a similar strip. It was Jack Kirwan who chose these colours. The promotion also forced the club to amend it’s name from simply Ajax to Ajax Amsterdam to avoid confusion with Liedsche Ajax.

The Dutch National Championship, as it was then known, was split into two divisions, East and West. Ajax took their place in the Western division alongside teams such as Sparta Rotterdam and Haarlem. It was to be another few years until more familiar teams such as Feyenoord and PSV entered the National Championship. In the 1911/12 season Ajax finished 8th and avoided relegation. This was regarded as a success for a newly promoted side. More importantly the club’s profile was rising, as attendances increased and Gerard Fortgens became the first Ajax player to be ever selected for the Dutch national team.

The following season, 1912/13, Ajax survived again this time finishing in 9th position. However the 1913/14 campaign was a disaster and the club were relegated after finishing bottom of the league with only 12 points. It was also in this season that Ajax suffered their heaviest ever defeat, a 9-1 home loss to Dordrecht FC.

After the relegation most of the big name players left the club and Kirwan was forced to re-build the team from the bottom up. Unfortunately this work was cut short by the outbreak of the First World War which meant Kirwan was forced to depart from The Netherlands and leave the task unfinished. He was replaced by Jack Reynolds, and the rest as they say, is history.

The relegation of 1914 must have been a bitter disappointment to both Jack Kirwan and the Chairman, Chris Holst. Nevertheless, it must be remembered that Kirwan had developed the club from it’s humble status in 1910 and paved the way for Jack Reynolds to win trophies.

What became of Jack Kirwan after he left Ajax? Well, firstly he returned to his native Ireland to manage Bohemians of Dublin. Then in 1923, Kirwan took up his second managerial appointment in mainland Europe, when he took over the Italian club, Livorno. During his time in Italy, Kirwan guided Livorno to 3rd and 5th places in the northern section of Prima Divisione (the predecessor to Serie A). 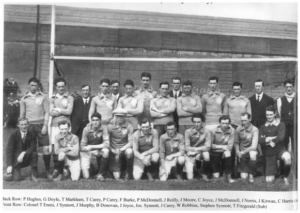 Jack Kirwan left Livorno in 1925 and retired from football altogether. He returned to settle in London with his wife Eileen and two daughters. He died in 1959 at the age of 80. After his death his family gifted his medals and other football memorabilia to his beloved Tottenham Hotspur.

It is sad that Kirwan’s name is now largely forgotten in the UK and Ireland. I suspect this may well be the case in Holland as well. He achieved much in his sporting lifetime. As an athlete he won the All Ireland final in Gaelic football and an FA Cup with Tottenham. From an Ajax perspective, his greatest achievement was to win the club it’s first ever promotion and a place amongst the elite of Dutch football at that time. In effect, he planted the very early first seeds that allowed Ajax to become the club that it is today. For that reason all Ajax fans should be very grateful to Jack Kirwan.